To ensure optimum fire detection in its large atrium, the impressive new Los Angeles Federal Courthouse has installed four Fireray beam smoke detectors from FFE. The units were commissioned and installed by SimplexGrinnell.
“Because the atrium is so high, conventional smoke detectors were not suitable for this installation,” commented Managing Director Mark Osborne. “Our Fireray 5000 auto-aligning, reflective smoke detectors were selected instead as they are ideal for this kind of large interior, providing extensive coverage at minimal cost.”
Fireray 5000 beam detectors work by transmitting a beam of invisible infrared light across the building space to be protected. A receiver detects and measures the light and can recognise smoke interference anywhere along the beam path, triggering the alarm signal when the pre-determined threshold is reached.
One of the deciding factors in Fireray 5000 detectors being specified for this application is the ‘low level controller’ feature, which means maintenance and testing can be carried out via the control room. “As the units are situated high up, physically accessing them regularly is exorbitantly expensive and impractical, so remote access is essential,” says SimplexGrinnell’s Construction Manager Sharon Brown.
Another important factor in any new-build project is building movement. All new buildings need to ‘settle’, and for beam detectors, which rely on precision laser alignment at opposite ends of the building, any movement can mean the beams become unaligned. The Fireray 5000 compensates for this through its ‘auto-alignment’ feature, ensuring beams remain aligned during building movement, without causing nuisance alarms or requiring a technician.
The new 10 storey, 633,000-square-foot courthouse, which is situated in downtown Los Angeles, contains 24 courtrooms and 32 judges’ chambers and has sustainable features such as a serrated facade that maximizes views yet also reduces solar heat gain by nearly 50 percent.
With over half a million optical beam detectors installed worldwide, Fireray is the first choice for installers and engineers looking for smoke detection in large open areas. With its modern design aesthetic and minimal footprint, the Fireray is popular with architects and facilities managers who care about preserving the original design of buildings. 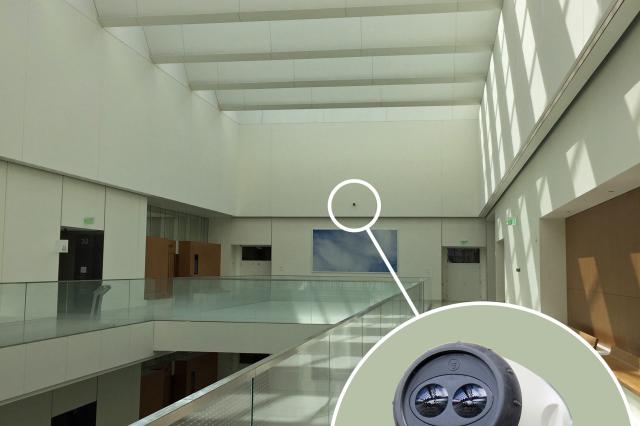