The installation of the latest version of FFE’s Talentum spark detector has corrected a problem with false alarms that was causing a plant operator concern due to increased costs and system downtime.

A FIRE PROTECTION SYSTEM THAT MUST WORK

The use of cotton wool as a medical dressing revolutionised the prevention of infection in surgical wounds when it was introduced in the 1880s, and Robinson Healthcare was an early pioneer of its manufacture. Cotton wool is still produced today in their ‘cotton hall’ in Worksop, Nottinghamshire, UK, which is the only plant of its kind in the UK. Here, bales of cotton are unpicked by machine and blended to give the familiar cotton wool product for sale in the UK. This avoids the overseas transportation of a highly voluminous product and considerably reduces its carbon footprint. The fine, dry cotton fibres are carried through the plant through ducting.

The ducting system is entirely sealed to prevent any contamination of the product, a critical concern for medical applications. However, like most cellulosic products, cotton is highly flammable, and the presence of finely divided fibres in air constitutes a significant fire hazard. Accordingly, fire protection is taken very seriously at the Robinson factory. The cotton wool plant is divided into three sectors. The ducting in each sector is continuously monitored at multiple locations by FFE spark detectors. A fire signal from any of these activates a bank of carbon dioxide cylinders which discharges into that section of the ducting and extinguishes the fire. As a further precaution, the external volume of the cotton hall and the associated warehouse are protected by a variety of smoke and rising heat detectors and an extensive water sprinkler system, in case a fire should escape from the ducting or start elsewhere in the building.

Thanks to robust safety procedures and processes, there have not been any actual fire events at the factory in recent times. However, a series of mysterious discharges of the carbon dioxide systems started to occur without warning. Steve Mears, Maintenance Manager for the Worksop site, commented: “There was no obvious cause for these discharges. In fact, some of them happened at night when the production line was shut down.” They quickly became a cause of concern for Robinson due to the costs of plant downtime and refilling of the carbon dioxide cylinders. Investigation by FFE and the on-site contractor, Assured Fire & Security, revealed that the sectors where the false alarms were occurring were monitored by very old, cylindrical flame detectors, which were now obsolete as they had not manufactured by FFE for over 15 years. They had been transferred with the entire system when Robinson’s relocated their premises 18 years earlier Unfortunately, these detectors could only be wired in series (‘daisy-chained’ together) which made it impossible to identify which specific unit had gone into alarm on each occasion. However, their age made it likely that they were all at risk of becoming faulty and so it was recommended that they be replaced with the latest Talentum® Single IR Spark Detectors.

The Talentum rear viewing spark detector is designed to protect enclosed, dark areas where visible light is not present. Each detector contains one infra-red sensor, which has a very rapid and selective response to low frequency (1-15 Hz) flickering infra-red radiation such as that emitted from flames and sparks. This sensitivity to flicker enables the detector to operate through layers of oil, dust, water, ice – or airborne cotton wool fibres. To minimise the likelihood of false alarms, filtering and signal processing are applied, and the detector rejects static radiation from sunlight and artificial lighting. A total of seven of the old cylindrical detectors on the Robinson cotton wool plant were replaced with Talentum Spark Detectors. The mounting flanges between the ducting and the detector also had to be modified as the two types of detector used different interfaces.

Since the old detectors were replaced, Assured Fire & Security has continued servicing the system twice a year. “During each visit, 50% of the detectors are tested using portable flame sensor test units and the response of each is checked at the fire panel. The status of each individual unit can be determined by the flame detector controllers which, in the event of an activation, operate interfaces on the main fire alarm system,” commented their National Account Consultant, Simon Ord. “All the detectors have continued to operate perfectly and no further false alarms have been reported.” Steve Mears at Robinson Healthcare is also pleased: “We are delighted that the system is now back to the level of reliability that we’ve come to expect from FFE’s products. It makes a big difference to our manufacturing teams to know that the detectors will only respond to a real fire event.” 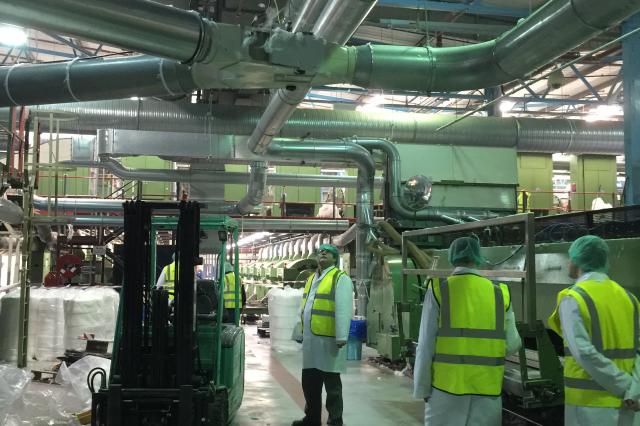